profile of a miracle 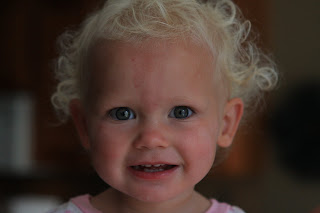 The thought of her upcoming birthday has me very sentimental today as I think back to the day of her birth, and what a miracle it is that she's here with us. Don't get me wrong, I consider each of my children a blessing and a miracle...God's creation. But her story is much different than the others, and I've wanted to put it in writing for sometime.

At about 36 weeks into my pregnancy with Frank and Rose, my doctor began ordering weekly testing at the hospital to measure their growth, and also to monitor their movement and reactivity. I didn't have this with any of the other 2 sets of twins, so I kind of felt it unnecessary this time around. At 36 weeks all was well, so when it came to 37 weeks, I tried to talk my doctor out of the tests. I felt great, was showing no signs of labor, and could feel the babies moving all the time. She was adamant though, so I went to the hospital as planned. It was a Wednesday, August 15th, the feast our Our Lady's Assumption, a perfect day for the divine intervention of our Blessed Mother.

I arrived at the hospital as scheduled for an ultrasound first. The babies measured quite large with Frank measuring about 3 pounds larger than Rose, but neither were small babies, so I wasn't worried. Next I headed upstairs to the OB department for the non-stress test. I was strapped with 2 belts holding fetal heart monitors and given a little button to press every time I felt a kick. The button made a little mark on the heart monitor print-out so the nurses were able to compare when a baby moved, and how their heartrate reacted to their movement. It was during this test that we discovered that little Rose, while she had a heartbeat, was not moving, or "reacting". They tried stimulating her by placing a loud buzzer on my belly, and even had me drink sugar-filled drinks to wake her up, but it was all ineffective. My doctor, who was just returning from vacation, so was not in her office as was typical for Wednesdays, was in the OB department instead and determined it was necessary for delivery right away. Her prescence at the hospital was just one more small piece of the series of miracles that occured that day.

I was moved into a labor/delivery room and started on pitocin to begin contractions. After several failed attempts to reach John at home, my mom and neighbor found him at the pool with the 7 kids...obviously neither of us had any inclination that this was to be "the day." He made it to the hospital with plenty of time to spare and about 2 hours later, Frank came into this world. A strong, healthy 8#7oz. baby boy. After his delivery, Rose's weak heart rate plummeted and her delivery became much more urgent. She arrived just moments later, white as a ghost, not breathing, and without a heart beat at all. She was lifeless. At this time, I became very aware of all the people that had gathered in the room. (Somehow, I was oblivious to them before, not sensing at all the seriousness of Rose's condition.) Our family doctor was there, an emergency room physician, a respiratory therapist and a whole entourage of nurses were present and waiting to do whatever they could to save this baby. And they wasted no time. They worked tirelessly for approximately 15 minutes doing chest compressions, intubating her, and providing breaths for her via an ambu bag. At one moment I saw a nurse listening to this tiny baby's chest with a stethescope and shaking her head as if to say she couldn't hear anything. Our good doctor kept working though, and soon her heart was beating again. She was put on a respirator, and brought immediately to the nursery for more care. I hadn't yet held her, or seen her face. But where there is faith there is hope. We prayed together for her life, and her health. I soon got word that she was stabilized and being prepared for transport to a hospital over an hour away that had a neonatal ICU. The nurses brought me to the nursery to hold her little hand and see her for the first time. She was very swollen, and looked like a baby doll, so pale. Baby Frank was there with her. The nurses thought that since she was stable for now, it would be good for them to be comforted by each other. I was glad for that. John's dad who is a Catholic Deacon, came to the hospital and gave her a blessing and said some prayers for her. I'm still so grateful for him coming there. It gave me peace in the midst of so much uncertainty.

It was the middle of the night when she was transported, so John visited with her the following day, and sent reports to me of her condition. It was hard not being there, and yet I had this beautiful healthy baby Frank who was a wonderful blessing and diversion. His immediate needs kept my mind from being totally consumed with worries of Rose so far away. I was forced to cast my anxiety on the Lord, and know that he would take care.

It was determined later, that sometime in my last 2-3 days of pregnancy, the placenta that gave nourishment to Rose in my womb had torn away causing a maternal-fetal bleed. This bleeding caused her to become very anemic, and caused her heart to work overtime to supply her frail body. The overworked, enlarged heart became inefficient, and caused the fluid buildup in her lungs and throughout her body. My doctor suspects that if Rose had not been delivered when she was, she would not be alive today. She discussed with me quite frankly, that she felt a certain divine intervention that day as well. And said she was grateful to be a part of it.

I was finally able to see her and hold her for the first time when I was discharged from the hospital Friday afternoon, 2 days later. She was still on the ventilator, and had various tubes and IV lines throughout her body. I sobbed when the nurse laid her bundled little body into my arms. It was at that moment that I was finally fully aware of the possibility of losing her. Seeing her helpless little body, and fully understanding how fragile life is. Prayers to our Blessed Mother continued throughout Rose's hospitalization, and miracles continued to occur. I asked Mary to be the mother for little Rose that I could not be, to help Rose to feel her prescence and comfort when I was unable to hold her or comfort her. I had made the difficult decision to stay at home with the other 8 children as much as possible, to allow my body to heal, to be there for newborn Frank and the others who desperately needed their mom to be present. I knew there was little I could do for Rose. Even holding her was not allowed in the early days of her hospitalization. So, I prayed our Heavenly Mother would care for her. John and I took turns making the drive every day, and visited her as much as we could. Each day she showed progress, weaning herself to different ventilators, until she needed no vent at all. Tests were done on her heart and brain to determine if any long-term damage had been done by the lack of oxygen she'd experienced. Everything came back clear. More miracles! And at about day 9 we were able to feed her first bottle. She drank less than a teaspoon, and I wanted to sing from the rooftops!! On her 10th day, it was my turn to visit. I arrived at the hospital to be greeted with smiles from the nurses and a "She's going home today!" I was in shock and disbelief as they had just told us the day before that we couldn't make homecoming plans for another week. She had met all of her goals to be able to come home, and in record time. The neonatologist visited that day, and in his own disbelief said the only thing keeping her there any longer was a lack for a ride home. I called John, got back in the van and drove the hour long drive back home with nothing but a smile and prayers of thanksgiving for the miracle of life we'd been given. We loaded up the whole family and a carseat for little Rosie and went to bring her home. Our only discharge instructions were to "take her home and love her" No follow up tests, no appointments, nothing. Clean bill of health, and no turning back. I believe with the exception of her well-child checkups, she's been back to the doctor twice now for the usual winter upper respiratory infections.

I am humbled by God's mercy and goodness, and ever grateful for a heavenly mother's love and intervention. God Bless Rose!
Posted by jamie at 10:36 PM

How beautiful, Jamie!! I never realized that Rose had such a difficult entry into the world.

I was reminded of Erin's birth and the need to thank God for all of His beautiful miracles!!