O Come Let Us Adore Him 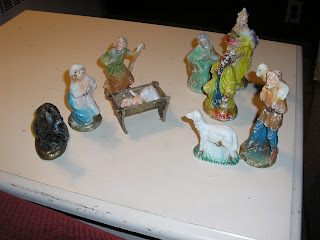 This set is kept at eye-level to a toddler, for the kids to handle and enjoy. John and I purchased it for just a couple dollars at a yard sale many years ago (pre-kids). It's previous owner was a sweet elderly woman who was down-sizing, selling her home and belongings to move into something smaller and easier to maintain. She admitted she'd had it for many years, but couldn't recall where it had come from. John and I imagined it to have a nice little history, so we picked it up. It's made of a plastic material, appears to be handpainted (as much of the paint is starting to chip), and each piece is signed and numbered on the bottom as if one of a series. The manger is made of a heavy cardboard which has been glued several times now.
The kids love to rearrange the figures frequently throughout the day. Frank likes to line them up in a row, Charlie tends to point everyone facing baby Jesus, and later one of the older kids comes through and sets up a traditional scene. Lucy...well, lets just say she enjoys touring them through the house in her Little People bus, where there's room for everyone...even a donkey!
Posted by jamie at 11:07 PM

I had to laugh when I read that Charlie faces everyone towards baby Jesus. I have a good friend who is a priest and he admits that anywhere he sees a Nativity set/scene he has an urge to face everyone towards Jesus if it is not already set up that way. Sometimes he does so secretly - no one watching - so that no one gets mad at him for changing the "setting". He says that Jesus should be everyone's focus.

MJ-That IS funny.
Thanks for sharing!