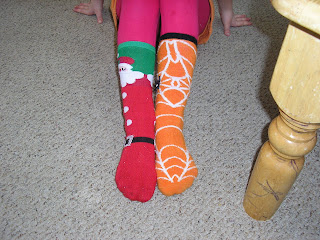 Most of my kids were THRILLED to have school cancelled yet another day. Not my middle-schoolers though. They let me know more than once how disappointed they were to be missing school during spirit week. Yesterday was to be "Wacky Day" and today "Christmas." Who wouldn't be disappointed to dress like a clown at school?! (Well, looking back at my middleschool years, I pretty much had that look mastered, but that's another story.)
Anyhow, in an attempt to ease tensions, I agreed to a Wacky Wednesday here at home. Boy was it ever. It started in the planning stages last night when Alice and Emma helped 7 of their younger siblings to choose the weirdest stuff they could dig out of their closets. (Sam wanted nothing to do with this. He's way too cool.) They laid out their wackiest attire and waited for morning to come. The six oldest did end up camping in the basement last night, while the 4 younger ones slept in sleeping bags in beds (though not their own beds, just to mix things up a bit.) This morning, everyone dressed quickly in their wacky-wear, and were pleasantly surprised to find pizza in the oven...for breakfast! Mid morning, we made homemade snow ice cream (a recipe I'll share later.) It was simple and delicious, and really fun to make! We had breakfast for lunch of course, and found time to cut out paper snowflakes. 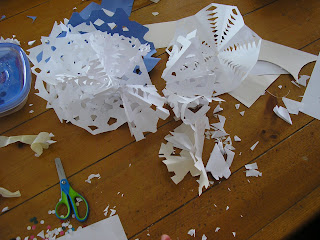 The younger kids help me mix up monster cookies, which took most of the afternoon to finish baking. Of course there was more time playing out in the snow, and the oldest two de-wacked to go play at a friends house for the afternoon. It was a fun day, though nothing terribly crazy, quiet and simple...good.
We're already on for a two-hour delay tomorrow, and I wouldn't be terribly surprised if they cancel again. We may have a few more disappointed ones to learn that Valentine's parties are cancelled, and Mary and John won't get to bring in birthday treats to share with their class. They're turning 6 tomorrow! Guess that means I need to get back in the kitchen and start on a cake...they want a "jungle" themed cake. Ummm. I'll have to think on that one.
Blessed (wacky) night all!
Posted by jamie at 10:12 PM