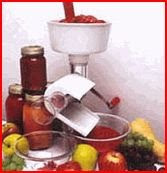 Tonight I'm working on homemade spaghetti sauce. This is a first for me, but some friends offered us their extra tomatoes and I just can't let them go to waste. I picked 2 full 5-gallon buckets of the gorgeous fruit; a combination of Beefsteak and Roma varieties. They planted 6 just as we had, but ours didn't fare well at all, while theirs were just loaded down with tomatoes, the plants as tall as me. Awesome!
Anyhow, my uncle and I got to talking about canning last week and he dropped off a tomato strainer for me to try. I'd never seen, let alone used one before...well let me tell you it is AMAZING. I put the whole tomatoes into a pan of hot water for just a couple minutes, then into cold water in the sink. Then one by one dropped them into the top of the strainer...all the while turning (or having the kids turn) the crank. The juice and pulp came out one shoot, while the seeds and skins dropped out the back. It was the cleanest process for seperating the seeds/skins that I'd ever seen! It made beautiful slushy tomato juice that probably could have been canned as is without any further doctoring, but I've opted to make pasta sauce instead. I'm using Mrs. Wages pasta sauce seasoning packets, which smells wonderful as it simmers. The sauce is a bit runny though, and everything I've read online suggests just letting it simmer to get rid of the water, for as long as 10-12 hours. So, it looks as though I'll be canning in the morning as opposed to this evening yet. Darn it...I'm in the mood. But, as I said, it smells divine, and will be worth it to have a nice thick sauce to can in the morning. I can hardly wait to try it...the tomatoes, garlic, oregano, peppers & onions all blended and permeating the whole house now. Yumm! 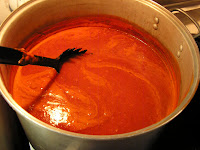 I love the smell of canning tomatoes... heavenly...

Jamie,
I've done quite a bit of Mrs. Wages canning myself (salsa, pizza sauce etc.) and have had the same problem with it being too runny. If you add a can of tomato paste to your recipe the problem will be solved without further cooking! It also makes the salsa a brighter color red!
Karen

Hey Jamie - we have the Roma strainer tool as well!!! That is how we have done all our sauces, juices, etc. We use it for applesauce and pear sauce as well. Aaron got it for me for Christmas one year, I think deep down it was really a gift for him!!! We had another family borrow it the other week and they ordered one the same night!!! We do not even cook our tomatoes when using it - just clean up, pop the tops off, and you are good to go!!! I have more grape juice to make today and two huge pots of salsa to can. I have to admit I am getting to the point of being ready to be done!!!

Oh the memories...my grandma has the older version of this strainer that was used for years and years. Being one of the oldest grandchildren, I spent lots of time at Grandma's "turning the crank". I think I need to do more of this at home...I'm just going to have to make time!

My roommate in college was Italian and her grandmother's recipe called for tomato paste as well if it was too runny (like Karen said) but wait for it to thicken first to see if you need it.

I've never used a strainer before, but I'm SOLD after reading how easy it was to work and how easy it made canning the tomato sauce!