can't keep a good man down 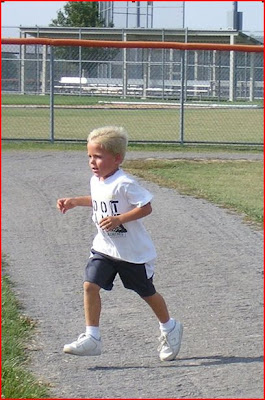 a story of one little guy's big determination
I've mentioned once or twice before that our little John (one belonging to our second set of twins) has Cerebral Palsy. He was diagnosed somewhere between the ages of 18 months and 2 years when his delays in walking were more than just his "being a boy." His twin Mary mastered walking on her own right away at 1 year, and we just thought John was taking his time. He seemed to know how to do it, but just couldn't master it without stumbling...a lot. Poor little guy was always black and blue. Anyhow, at 18months, we sought the advice of our family physician who then referred us on to a pediatric orhopedist (bone doctor), and then on to a developmental specialist. Turns out we'd noticed differences in the way he'd mastered lots of developmental milestones, but thought it was just John being "quirky"...like the way he held his sippy cup with his left hand turned completely over for balance, or the way he army crawled much longer than any of the other kids and managed to only use his right side. Subtle clues, that might have tipped us off sooner, had he not been so good at overcoming all of life's obstacles. We were completely shocked when the diagnosis of Cerebral Palsy came up, and yet many things started making sense. Cerebral Palsy simply means that somewhere during development in utero, or sometimes due to trauma at birth, some part of the brain that controls muscle tone and movement didn't develop correctly or was injured. It has increased occurence in twin births, and often affects the muscles of one entire side of the body. In John's case his entire left side is weaker than the right. He's naturally right handed, so has managed to compensate/overcome most challenges he faces. And as the doctor explained to us, his case is very mild...often unrecognizable to people he meets. It appears more as a clumsy demeanor to most. It's difficult and requires much concentration for him to master fine motor skills with his left hand. He's often tripping over his own two feet, bumping into things, and just generally not very graceful. Certainly he was blessed to be so mildly affected. And even more blessed to have such a positive winning attitude.
Today, he ran his first 1-mile fun run at our high school cross country meet. All kids in kindergarden through 6th grade came home with sign-up sheets, and while a couple of my others weren't too interested, John was certain he could "win the big trophy." I smiled to myself remembering one doctor early on, explaining to us that "he'd probably never play guitar or be great at cross country" to which my husband and I both laughed...neither of us had mastered these with our typical abilities.
Anyhow, I found myself sobbing in cheers for him on the sidelines tonight as he battled his way through the hills and turns of the course, stumbling at times over his own two feet, but always getting back up, smiling and moving on. I couldn't swallow the lump in my throat that was my heart as he'd push by, his big toothy grin was ever-present. At the final quarter mile, when I cheered loud for him to keep on, he jetted past me as if winning first place depended on it. He never seemed to mind one bit that remained running with and would finish in one of the last 5 spots. He did it! He was proud as could be to accept his participation ribbon, and was quick to congratulate the top finisher...with a comment about he himself taking home the trophy when he gets a little bigger. Never stop believing big guy! I am grateful everyday for the gift of you, and for teaching me about slowing down a bit to appreciate the journey. You are a beautiful example of determination, perserverance, and triumph! God has blessed us indeed! 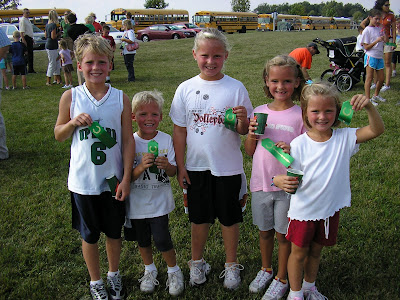 Tears in my eyes...what a wonderful way to see God's gifts! Glad he had such a wonderful time, you know he'll always be determined. Way to go, John!!!

Wonderful...reading this through tear-filled eyes! What a special boy you have there! Congrats to all of your "runners," especially John!

I agree Jamie, he definitely is made up of all these characteristics! You should be so proud - I did not even consider having Ava try, she compains after walking down to our stop sign and back :) Great Job John - and Alice, Emma, Grace, and Mary.
Karla

That is wonderful! Our bodies may not be perfect but that doesn't mean we can't overcome and work around those weaknesses. My grandmother was born with only one hand (in 1917) but she never let it stop her. She raised 3 children, had 6 grandchildren, and 10 great-grandchildren. I never realized she had only one hand until I was 10 years old.