John had the night off of work Friday so we took the 7 oldest to a minor league baseball game (Dayton Dragons.) We arrived at the game plenty early, with time for a quick picnic supper of cold meat sandwiches, homebaked cookies and grapes. We headed into the gates early for a nice seat in the lawn section of the ballpark. We learned after attending a game last year that the lawn fills up fast, so with blankets in hand, we were determined to find a great spot. We were met at the gates by the mascots (Heater and Gem) and the "fun crew" who helped plan various games and events throughout the evening. John and Mary felt like they'd hit the lotto when they were invited to run the bases after the first inning. We quickly found a perfect spot, near the end of first base line, and spread out our blankets for the game. John, Mary and I headed off to meet the fun crew as previously planned, and were excited to find that they led us under the stadium and into the dugout where we were introduced to the coach and a few players. They competed against each other in a race around the bases, with a stop at each base where they were assisted in donning pieces of their assigned costume. John dressed as Uncle Sam, and Mary as Betsy Ross. It was aweful cute. John was given a huge hat to wear, which fell to his shoulders, covering his entire head. It made putting on the much-too-large pants at 3rd base impossible...so he and the entire crowd seem tickled when the helper just scooped him up and helped him finish the race. Mary won...she'll be quick to tell you that, but truth is, they both won. It was great fun for them, and they each received a free Dragon's t-shirt for their efforts. Who could ask for more than that.
Oh but there is more. As we left the fun crew behind, and headed back to our own "fun crew" in the grass, a fly ball landed on the ground right in front of us. An usher was quick to pick it up and hand it to Mary. (Can it get any sweeter?!)
The night ended with an awesome fireworks display over the nearby river, put on by the city of Dayton. Fireworks started just moments after the game ended (by sheer coincidence) and our grass seats at the game provided the perfect viewing location. Fifteen minutes of the most beautiful fireworks I've ever seen. (not that I've seen many...but still) Just awesome!
Despite our late night, I woke early, and headed out for a nearby Fourth of July 5k run. I ran it in it's entirety, for which I'm quite proud. I'm hoping to continue to improve and shave a few minutes off my time for my next 5k in August. Around lunch time the entire family watched the Independence Day parade and visited with relatives at John's Aunt and Uncle's home. It's become tradition to sit on their curb every year where other cousins and distant relatives meet. It was a short parade with lots of candy...everyone left happy. The rain moved in later that afternoon, so our plans for sparklers were put on hold...something to look forward to for next week perhaps.
We ended the weekend with a birthday party for John's godson. Ice cream, baseball, and playing/visiting with cousins is always a treat. The kids spent time catching lightning bugs and putting them into a plastic mayonaisse jar. It was to become a night-light for the older kids camping in tents in the yard there.
Overall it was quite an enjoyable weekend, one that was not over-planned, yet held pleasant surprises for all. I'm thinking these are the kinds of weekends memories are made of. 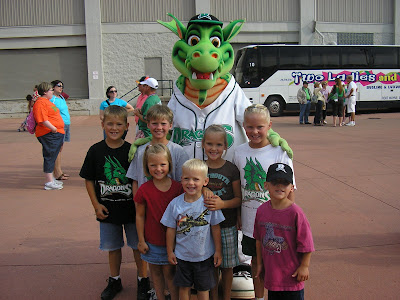 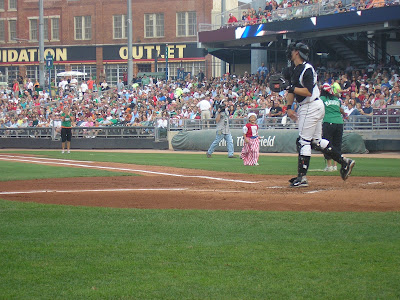 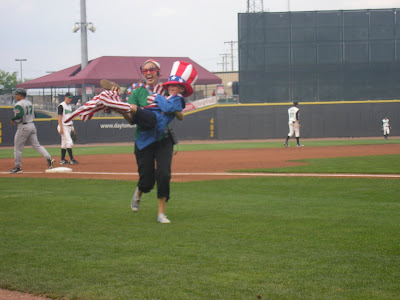 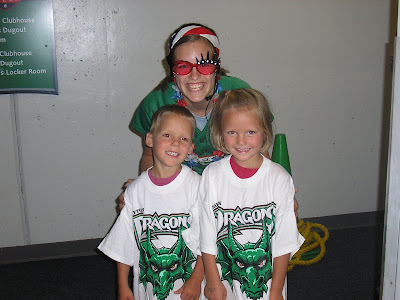 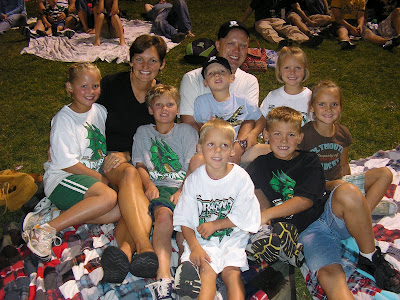 blessed to be a Mom said...

You have such a beautiful family! What a blessing to make such wonderful memories. We too enjoy these ballgames, but we go the other way to Fort Wayne. What fun!!

New Bremen's firemen's picnic includes a 5K if you are interested in doing another one before August. It is Sat., July 25th at 8am.

I love weekends like that! What fun and great pictures.