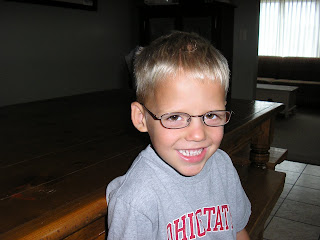 John "Squints" Schmiesing has some new specs...and is looking rather handsome, I think. He had an eye exam last month after failing his kindergarten vision screening. We learned he is farsighted in his left eye, while he has perfect vision in his right. The difference not only affects his ability to focus, but also his depth perception...which may explain some of the silly accidents he's been in over the years (like walking into poles, etc.) The problem with his left eye is most likely a result of his having Cerebral Palsy, muscle weakness that affects his entire left side. So far, he's in love with the glasses and the new resposibilty it entails. Oh yah, he's ALL that!
Posted by jamie at 4:35 PM

We found out Isaac was blind in one eye thanks to that screening! His (your son) glasses look awesome!

Claire and Maura came home from school and told me all about John's glasses. They were both amazed that he had them. It was a very long/cute conversation...

My John had just gotten glasses when we adopted him at age 21 months. He liked them so much that when he woke up in the morning, the first thing he would do is point to them and want them on.
Your John sure does look handsome in his!