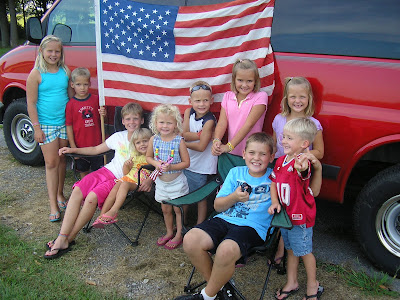 Earlier this week, John and I had the youngest four at Walmart to pick up a few essentials. I couldn't help but notice an elderly couple watch us enter the store with our little Rose in full-on tantrum mode, upset that she couldn't ride in the cart seat that she wanted. (Okay, they were more than watching...necks were bending and a couple times they turned around to walk backwards...better able to watch us that way.) I was frustrated to say the least, and I forced out a really loud, overly friendly "Hello there" as we finally met in the doorway. (Tried to kill 'em with kindness.) Turns out I'd soon be eating humble pie as they graciously introduced themselves, talked with tantrum-ing Rose (even gave her a little wooden hand-carved puppy), and showered us with kindness and well-wishes. "What a blessing you have there!" the kind man added. "You just love every minute with them...good and bad," he added. He went on to say that he and his wife had just one son. "We lost him in VietNam in 1969."
My heart sunk for them. My dad was there in 1969...it could have been him...and here I am frustrated about my pint-size "problem," that suddenly seemed so trivial. I'm such an ungrateful schmuck sometimes.

Fast forward to Wednesday night...mom called and said she and dad had a "ride" (that's motorcycle lingo for a "ride"...on their Harley (aka..."bike"). They were going to be a part of a procession of bikes that would escort the traveling Vietnam Wall Memorial display. She thought the kids and I might want to watch the hundreds of bikes expected to turn out for the escort. I kinda shrugged it off, thinking it was hot, it was a school night, we'd seen lots of bikes before. Last minute though, I thought of the fella at Walmart, and of his son, and had a change of heart. I thought maybe it would be a good thing to witness, and be a part of. The kids and I loaded up the van and started off to find a good spot along the route.

I tried to prep the kids a little about the Wall, and what it represents, and that the "parade" of motorcycles was in fact not a reason to cheer and hollar, rather we should be respectful...dare I say even somber remembering the soldiers that died. They seemed to understand the expectations I had for them, though not necessarily what the Wall was. We'd brought along our American flags, and took our places outside the van just in time for the escort to pass by. Almost immediately upon seeing the flashing lights, and those first bikes leading the way, I was overcome with emotions I hadn't expected. Tears filled my eyes, and I had to fight them back as many of the riders made eye-contact and nodded or gave us a thumbs up for being there. I couldn't help but realize that many of them had probably served our country at some point, perhaps even alongside the fallen soldiers this wall memorialized. I thought of my grandfathers, my dad, my brothers and in-laws who've all fought and made it home safely...and even considered the possibility that one day it could be one of my own boys wanting to do the same. An overwhelming sense of pride, and respect, and feeling of a sense of privelage to "welcome them home" came over me. Truly it was an honor and a blessing to be there to witness and be a part of something like this.
It turned out that more than 2500 motorcycles were on hand to escort the Wall. It took an hour for the procession to pass, and by the end we were hot and exhausted, kids were bored and tired of behaving, and thirsty, and whiny...and everyone was ready to leave. It was only an hour I told myself...such a tiny, tiny sacrifice. I offered it up in silent prayer as we drove home...for those whose sacrifice doesn't even compare. Thank you men and women of our military, and God Bless.

I to ask if there was something written on the foot of this dog/ Was this man at the Sidney Walmart? Erin received a dog a few years ago but I cannot remember what the man said to me--he came out from nowhere in the parking lot.
Don't worry about being rude--it drives me nuts when others stare. If they want to know something just ask--that would be more respectful than to stare!

Amy...I can't find it now, but I know he wrote "Sidney, Oh" on one paw and maybe his name or initials on the other. I thought too after looking at the little hand-whittled pup that one of our older kids got one years ago. (apparently Rose isn't the only one causing a fuss in Walmart...)