"I was 27 when I had baby Grace,
I was born again when I saw her sweet face..."
~Gretchen Wilson

Okay, actually I was 30...but I love singing those lyrics to her, and usually change the words a bit. She was the prettiest baby I've ever seen, with perfect porcelein skin, pouty red lips, and dark hair. Just beautiful....I think she still is.
I just can't believe she's seven already...five, maybe six, but SEVEN?! Where does the time go?!
She received a Webkinz fish from her grandparents. She's waited forever for one (according to her), and the look of excitement on her face when she opened it was hysterical...almost as funny as Alice's excitement for her. Ha! 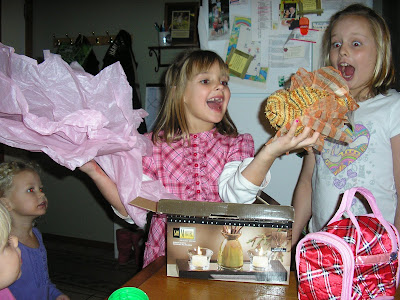