I was thinking to myself tonight, what a hot/muggy summer it's been this year. Perhaps I'm becoming a wimp with age, perhaps its pregnancy (although I've been feeling wonderful just into my seventh month now), or maybe I've just gotten spoiled. We don't have central air conditioning in our home now, but window air conditioners have been running almost constantly keeping us plenty cool. We also have one fan in our hallway to help circulate the air throughout the main floor. It's a window "box" style fan we keep setting on the floor, that reminds me of hot summers as a kid, long before we'd heard of air conditioning. Each of us then, kept a square box fan in our bedroom windows to blow the warm air out of the house. It hummed all night long, and never seemed to allow the slightest breeze. Uggh. I can remember some miserably hot nights laying on top of the sheets listening to that cursed fan, wishing I could turn it around, but knowing Dad had some logic as to why it was pointing out. (The mosquitos stayed cooler than me.) Those old box fans were awesome for making tents in the family room though during the day. We'd clothespin bedsheets to the edges of the fans and allow the air to blow through to create a tent city for us to crawl through. I also recall singing into the fans repeatedly, always enjoying the vibrating effect it had on our voices as we'd sing...always the same song...always drawn out with a southern twang for a more vibrato effect. "Oh Suzanna, oh don't you cry for me..." was the best fan-singing-song around. If you don't believe me, give it a try. Don't forget to hang on the last line a little for the best effect..."I come from Alabama with a banjo on my knee-eeeeeee" Love that vibrating sound!!!
I had to laugh when I found Charlie laying on the floor in the hallway today with his little green army man, calling out battle orders into the fan, enjoying the same sounds we enjoyed as kids. I couldn't help laying with him for awhile...and teaching him "Oh Suzanna." He liked it...almost as much as I did. Some of the older kids had friends over in the house to play, and I had to finally stop singing to prevent total embarrassment to my kids. It was a fun little trip down memory lane though, and it didn't take long for Frank to join his brother in my place as they continued singing. I walked away from them to their tune of "I love you mommmmmm! This fan is so cooooooooool." Yep. Way cool. 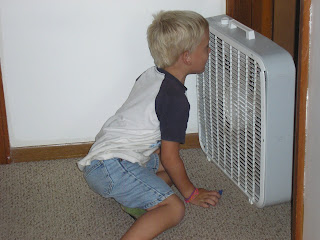 box fans also keep many of our kids cool during the warmer months--yup, great entertainment for $10!!! Kurt likes putting the fan directing outside too. He thinks that it will feel cooler if the fan helps suck air in through other windows and out of your window---I disagree!! :)

My parents always had the fan blowing out also and I remember those miserable hot nights as well...I am ever thankful for living in the era of air conditioning...=)

"Luke, I am your father..." Was our favorite fan saying reminiscent of Darth Vader in Star Wars.

"Luke, I am your father..." Was our favorite fan saying reminiscent of Darth Vader in Star Wars.

You can bet we'll be trying that one out soon...