Just 9 more days to go!! (My very sweet doc agreed to induce labor on October 26th...seeing as how I typically carry babies that want to stay snug much longer than necessary...and seeing as how we grow 'em big here...oh, and planning for a babysitter for the kids at home, rather than calling someone at 3am is a good thing!)

I thought today would be a perfect time to begin a novena for the safe delivery of this new little one. As I searched for one online, I was reminded of St. Gerard and found several prayers for his intercession. (We prayed to him often as we stormed heaven with prayers in those early years...struggling with infertility and desiring to start a family.)

Thought I'd share this prayer, for those of you who may also be expecting (or know someone who is) or if you'd like to join me in prayer as we count down the days.


A Prayer to St. Gerard for Safe Delivery
O great Saint Gerard, beloved servant of Jesus Christ, perfect imitator of your meek and humble Savior, and devoted child of Mother of God, enkindle within my heart one spark of that heavenly fire of charity which glowed in your heart and made you an angel of love.

O glorious Saint Gerard, because when falsely accused of crime, you did bear, like your Divine Master, without murmur or complaint, the calumnies of wicked men, you have been raised up by God as the patron and protector of expectant mothers. Preserve me from danger and from the excessive pains accompanying childbirth, and shield the child which I now carry, that it may see the light of day and receive the purifying and life-giving waters of baptism through Jesus Christ our Lord. Amen. 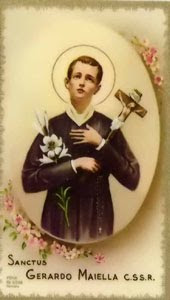 ...and a little history of the saint, who's feast day just happened to be yesterday.


Profile:
Son of a tailor who died when the boy was 12, leaving the family in poverty. Gerard tried to join the Capuchins, but his health prevented it He was accepted as a Redemptorist lay brother serving his congregation as sacristan, gardener, porter, infirmarian, and tailor. Wonder worker.

When falsely accused by a pregnant woman of being the father of her child, he retreated to silence; she later recanted and cleared him, and thus began his association as patron of all aspects of pregnancy. Reputed to bilocate and read consciences. His last will consisted of the following small note on the door of his cell: "Here the will of God is done, as God wills, and as long as God wills."
Posted by jamie at 8:11 PM

Just read this beautiful prayer with you and your newest little one in mind, Jamie. Blessings of peace for you and your family in this precious time--please know we're praying for you!

I said a novena to Our Lady of Schoenstatt with the last pregnancy and Rachel was born on the ninth day, with a great labor and delivery.

I was wondering, Our first was a c-section and the next 3 have been VBAC's. It's getting harder to find hospitals that do VBAC's. Rachel was born at St. Rita's in Lima. The last I checked Wilson in Sidney and Upper Valley don't do VBAC's. Maybe you haven't had a c-section so this would't be an issue for you. But with 3 sets of twins if you haven't had a C-section you are REALLY blessed :)

I will pray for a safe, easy delivery and Healthy Mom and Baby :)

Thanks for the prayers...

April, actually, yes I have been VERY blessed. No c-sections yet, and I'm praying to continue that pattern.
I had talked to another mom who was delivering VBAC though, and I believe she had to go to Miami Valley to find a doctor/hospital willing to deliver. If you'd like I can double check with her, and get back to you on that...it's been a couple years ago now.
Will keep you and your little one (his name escapes me now) in our prayers as well!!

Thanks for the info Jamie! Yes, I had also heard the Miami Valley does VBAC's. For us the distance to Lima and to Miami Valley is about the same. So I could go either way, it would be about a 45 minute drive. Since I am not pregnant right now, I guess we'll cross that bridge if/when we come to it. :)

I kept a prayer card for St. Gerard in my purse and always said a prayer before my OB appointments.

What an exciting time for all of you!

oops. sorry April. Had you confused with a local friend, April that's expecting.

will you have an amnio first to check the babies lungs

anon...nope, fortunately I've never had to have that test (amnio) either. Oct 26th puts me past the 39 week mark. (37 is considered "full term" for a singleton) and most doctors (hospitals and insurance companies?) consider 39 weeks to be the "safe" point for an induction.