Haven't had any little Frank tid-bits on the blog lately.  Despite his constant grumpiness, and "worst days ever!"  that kid cracks me up.  He is the cynic, the critic, the glass-half-empty kinda guy.  And despite his best efforts to drag me into his mood-of-doom, I just want to squeeze his cheeks and love on him that much more.

Here's his latest and greatest...


He and Sam got into an argument.  More like Frank drove Sam absolutely over the edge repeating the same 3 or 4 words over and over again, until Sam snapped, yelled at him and sent him out of the room, banished from the table of Lego's they'd been sharing.  Frank (annoying as he'd been a few moments ago) was now heartbroken, in tears, and wanting to write Sam a note to apologize.  He sat down at the bar as I was fixing lunch and sounded out the note as best he could...asking me a couple times how to spell certain words.  In the end...his simple apology, and peace offering totally cracked me up, and melted me like butter (or cheese!) 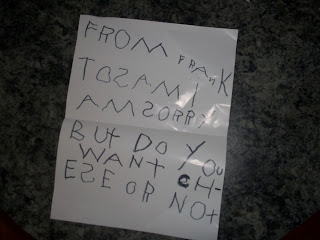 When I asked him what the heck he meant by the cheese part, he replied with a shrug, "In case he's hungry!"   (naturally.)

Oh, my gosh....that is the sweetest thing ever! Would you like cheese with that? Sounds like a future McDonald's employee, too! :)